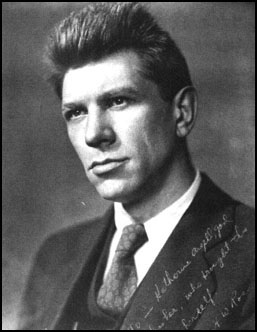 The founder of The New Yorker grew up in Salt Lake City.

Ross was born November 6, 1892, to George and Ida Ross in Aspen, Colorado, where his father was involved in mining. When Harold was seven years old his family moved to Salt Lake City. As a freshman at West High School he worked on the school newspaper, the Red and Black. There he became acquainted with the artist John Held, Jr., who was later to become famous for his caricatures that defined the Jazz Age. While still a teenager Ross started hanging around the offices of the Telegram and Tribune. Eventually he was given a part-time job running errands for the Telegram’s sports editor.

Ross, who did not get along with his father, frequently ran away from home. He dropped out of high school after his freshman year to work full time for the Tribune. In the summer of 1910, at the age of 18, he left Salt Lake City, ”riding the rails” and working as a “tramp reporter” for newspapers across the country. He started working for the Sacramento Union in 1911, journeyed to Panama City, and then moved on to New Orleans and Atlanta. In 1916 he was back on the West Coast, working part time on the Call and Post.

In the spring of 1917 Ross enlisted in the 18th Regiment of Army Engineers and was sent to France where he worked on the Stars and Stripes, the newspaper of the American Expeditionary Force in World War I. When the war ended Ross settled in New York City and tried to revive the Stars and Stripes in a publication called the Home Sector Magazine, but it was unsuccessful. He then edited the American Legion Weekly for two years (1921-23) which was followed by a job with Judge, a humor magazine.

Then he got the idea to start his own magazine. The New Yorker was conceived by a group of writers that Ross socialized with called the Thanatopsis Literary and Inside Straight Club. This group had originally met in Nini’s, a Paris cafe, and moved to the Algonquin Hotel in New York City after the war. Most were former members of the Stars and Stripes staff. Among them was a nonjournalist, Raoul Fleischmann, one of the heirs to the Fleischmann yeast fortune. He advanced the money for the first issue of The New Yorker, which appeared February 19, 1925.

Fleischmann had resigned himself to losing money on the venture, but because of the quality of the magazine, advertisers supported it. The New Yorker was noted for its features such as “Talk of the Town” and “Profiles” and for excellent writers like Dorothy Parker and James Thurber.

Ross died December 6, 1951, after an operation on his lungs. He was survived by his wife Ariane Allen whom he had married in 1940 and his daughter Patricia.