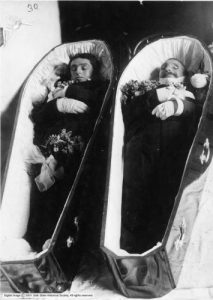 A father and son prior to burial. The May 1, 1900 explosion in the Winter Quarters No. 4 mine greatly affected the town of Scofield, killing many of the mine employees.

In the early morning of May 1, 1900, several hundred miners of the Pleasant Valley Coal Company of Carbon County left their homes in the town of Scofield to begin another day of work in the mines. Some were looking forward to the evening celebrations at Odd Fellows Hall where festivities would be held in honor of Admiral Dewey’s 1898 defeat of the Spanish navy in the battle of Manila. Little did they know that the events of the day would culminate not in lively celebrations but in the death of 200 miners. It was the worst mine disaster in America to that time.

At 10:28 A.M. the No. 4 mine shaft unexpectedly exploded. Though the sound of the blast was heard in the nearby town, many residents thought at first that it came from fireworks set off early in celebration of Dewey Day. Those working closer to the mine were more wary of the noise. Mine superintendent T. J. Parmley quickly organized a rescue team to assess the damage.

What the relief crew saw as they approached the No. 4 mine was horrifying. 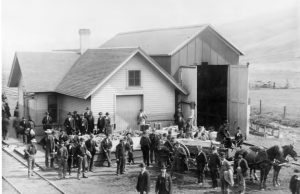 Coffins Waiting for the Train.

John Wilson, a miner who had been standing at the opening of the mine at the time of the blast, had been blown 820 feet and was lying against a tree. It took nearly twenty minutes to clear away the debris that blocked the entrance to the mine. Time was crucial for those trapped inside. When the crew was finally able to enter the mine, they found that some men were still alive but quickly suffocating from the deadly gases left by the explosion. Miners in the No. 1 mining shaft, connected through tunnels to the No. 4, were also dying from the toxic fumes. 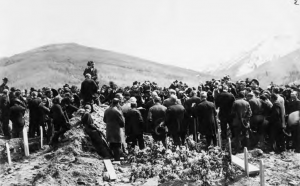 During the next two days the towns of Clear Creek and Scofield began the sad process of caring for the dead and wounded. Once dragged from the mining shafts, dead bodies were taken to the company boarding house where they were cleaned and dressed for burial. Then they were taken to the schoolhouse where mothers and wives anxiously waited to claim them.

The Pleasant Valley Coal Company provided the necessary materials to properly bury the dead. Coffins were shipped in from Salt Lake City and Denver. William Sharp, company manager, came from Salt Lake with several doctors to offer assistance to those who were still alive.

On May 5 two large funerals were held in Scofield, a Lutheran service for the 61 Finns killed in the accident and an LDS service directed by several General Authorities of the church. Services were also held in other towns throughout the state. Crowds of people waited at the Salt Lake train station for the bodies of loved ones to arrive for burial.

The Scofield mine disaster left a deep scar in the community and in Carbon County. Although many felt that the mine operators had failed to implement proper safety procedures, state officials cleared them of blame and the Pleasant Valley Coal Company continued operating until 1923. Since then, Scofield has become a ghost town. Several miles from the ruins of the town signs of a great explosion can still be found at the opening of the old No. 4 mine.