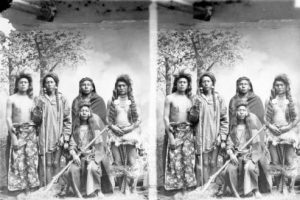 Fifteen years after the Mormon settlers arrived in Utah, their livestock had so overgrazed the native grasses and seeds that the Indians were starving, noted Jacob Hamblin, one of those settlers. The Great Basin was hardly lush to begin with, but indigenous peoples had survived there for centuries. How did they live on the land? And why was the Euro-American way of living so devastating to the native tribes?

Each group of Native Americans survived by adapting to the resources of its own area. Consider the group now called the Northwestern Band of Shoshone Nation. Earlier, they called themselves kammitakka, “jackrabbit-eaters,” and lived in northern Utah and southern Idaho. They lived in small and fluid family groups, hunting and gathering scarce resources throughout the spring, summer and fall. During the winter, the small groups gathered together into larger camps in areas that provided cover, timber, and food sources to supplement the foodstuffs they had gathered and stored. Often they wintered near hot springs at Battle Creek near Franklin, Idaho or at Promontory Point or Crystal Springs in Utah, erecting brush or tipi homes.

The Northwestern Shoshones were neighbors to two different groups of Shoshone peoples. Those to the north fished the Snake River drainage and depended heavily on bulbs like bitterroot and camas. The Shoshone in western Utah and eastern Nevada lived in a dryer place, relying on foods like pine nuts, grasses, and desert animals.

The Northwestern Band moved between these two groups–after all, the Shoshones were all close relatives–and used the resources of both areas. They fished Bear Lake and the Bear, Weber, and Snake rivers, using spears, gill nets, and basket traps. They snared or shot waterfowl, grouse, coots, and owls, and they snared small animals like wood rats, muskrats, and squirrels. To cook these, they singed the fur off then roasted the animals whole or stuffed.

Large game required other hunting techniques. Working as a group, hunters might drive deer into brush corrals in narrow canyons. They also hunted mountain sheep, stalking or ambushing them or beating on logs to simulate the rams’ rutting battles.

Men often joined forces to hunt pronghorn antelope. A person who was thought to have spiritual power directed the communal hunts. This shaman would visit the herd, sing to the animals, sleep with them, and help drive them to a brush corral, where they could be shot. Large hunts such as this were only held every five or ten years, however, as it took the antelope population that long to recover.

Other animals used by the Shoshone included beaver, elk, porcupines, mountain lions (rarely), bobcats, hares and rabbits, otters, badgers, marmots, and bears. The hunters often took care to avoid killing female animals, birds and fish during times when the animals would be bearing or caring for their young.

Of all the plant foods, pinyon nuts were the most important. The band usually went to Grouse Creek, in northwestern Utah, to gather the nuts in the fall. After they harvested the green cones, they would roast the cones to release the seeds. They would then parch the shells to make them brittle, crack them with a metate, and winnow the nuts with a fan tray. The parched nuts could be eaten whole or ground to make a warm or cold mush.

The Pinyon Harvest was a time of religious ceremonies, and the people regarded the pinyon-gathering areas as sacred. But the Shoshone apparently approached all of their relationships with the land spiritually. Animals killed were often treated ritually, with their heads placed to the east or their organs set out in the brush or trees; the dead animals were addressed with special respect. Plants were harvested with prayers and offering. When digging a root, for instance, a Shoshone might leave a small stone or bead in the hole.

According to anthropologists, Great Basin peoples regarded animals and plants as powerful agents that could help or hurt the people. Certain plants–sagebrush, for instance–were used ritually. It was crucially important to the Shoshone to maintain a harmonious relationship between the natural and human worlds. Prayers of petition and thanks, then, were part of everyday life.

These attitudes still persist among many. In 1980 a fieldworker interviewing Western Shoshones for an MX missile environmental impact study wrote that the people had a high attachment to and reverence for the land. The interviewees described the sacred sites on the land but would not identify them, fearing that the sites would be disturbed. They also spoke against the impacts of the MX missile system, saying that “When the is sick, the people are sick.” In the Shoshone view, wrote the fieldworker, the land, water, fish, and fisherman are all holy.

In the past, there was no ownership of land among the Shoshonean people; all Shoshones had a right to its resources and all had a stake in keeping well. But the end of this way of life, with its seasonal migrations and small-group cooperation, began when Mormon settlers moved onto the traditional Northwestern Shoshone lands. Also, emigrants hunting and grazing their livestock along the Oregon Trail decimated food sources and polluted streams.

To fill the gap, some Shoshones turned to begging, stealing food, or raiding livestock, acts that they saw as “collecting rent.” Others became more violent, killing Euro-Americans in retaliation. But in the long run these strategies could not sustain the band. The Anglos reached their own goal–to permanently remove the Indians from settlement lands–far more efficiently. The Bear River Massacre was on part of the “solution” to the “Indian problem.”

Another was to move the band onto a 1,700-acre farm at Washakie, in northern Utah, in 1875. There, the people who had successfully hunted and gathered for centuries were taught to build permanent houses and to farm. They learned a different way to live on the land, and although they held on to some aspects of traditional life, in essence they had to give up their own culture and adopt much of the worldview of their conquerors.

With the band relocated onto farms at Washakie, it was not very long before the traditional Shoshone lifeways on the land had disappeared forever.