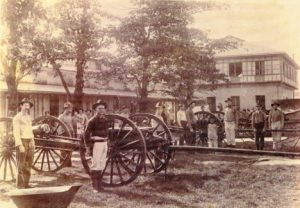 The Spanish American War, which lasted from March to December in 1898, was a short war; but it was significant in bringing the United States into the world arena as a major power. The United States defeated the Spanish forces in naval and land battles in the Philippine Islands, in Cuba, and in Puerto Rico. In many ways, the war was a comedy of errors and a “lark” for Americans, who saw the war as a romantic adventure to save the native Filipinos and Cubans from the oppressive Spanish government and to defend the honor of the United States. 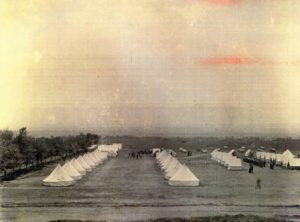 Like other states, Utah became involved in the war when the federal government called for 125,000 volunteers to augment the small regular army of the United States. Utah’s original quota of volunteers was 425, but by the end of the conflict Utah had sent 800 troops. Most Utahns served in units organized within the state which were formerly National Guard units; but because of a technicality in the law, the National Guardsmen were prohibited from serving outside the boundaries of the United States. The states got around this technicality by having the guardsmen resign and then reenlist as members of federal units. The units from Utah that served in this fashion were batteries A and B of the Utah Light Artillery; Troop A, Utah Cavalry (regular cavalry); and Troop I of Torrey’s Roughriders (a special troop of mounted riflemen). Most of the enlistment into the artillery batteries A and B, Utah Volunteers, came from the National Guard of Utah A and B batteries; and Troop A, Utah Cavalry, came mostly from the National Guard Cavalry Troop C. Torrey’s Regiment was designated as special cavalry for the state and was recruited from throughout the state. Company K of Engineers, 2nd Engineer Regiment, U. S. Volunteers, was recruited from Salt Lake City, and another two hundred men from Utah were recruited into the 4th U. S. Cavalry, the 14th U. S. Infantry, and the 11th U. S. Cavalry. In addition, two Afro-American regiments—the 24th Infantry, Regular Army, stationed at Fort Douglas, and the 9th Cavalry, Regular Army, stationed at Fort Duchesne in eastern Utah—left the state to fight in the Cuban and Philippines campaigns.

The service rendered by each of these units varied: some saw military action; others were stationed in areas of the United States and Hawaii. Batteries A and B, Utah Light Artillery, were mustered in on 9 May 1898 and proceeded to the Manila campaign in the Philippines. The officers appointed to lead these units were Captain Richard W. Young (a West Point graduate, former regular army artilleryman, and a son of Brigham Young), and Captain Frank Grant (who had served in the Utah National Guard as a colonel). In the Philippines, these units fought as the 2nd Brigade, 2nd Division. The American campaigns resulted in the capture of Manila and the surrender of the Spanish troops on 14 August 1898.

After the defeat of the Spanish troops, the war moved into the Philippine Insurrection phase, in which the Americans fought against the Filipinos who were trying to gain their independence. American troops, assisted by the Utah Artillery until 1899, continued to fight until the insurrectionists were defeated in 1901. Utah A and B batteries left the Philippines on 24 June 1899, having fought in more than one hundred engagements and suffering casualties of fifteen men killed by fighting or disease and fourteen others wounded.

The other Utah troops to see action were the black units, the 24th Infantry Regiment and the 9th Cavalry Regiment, who were engaged at San Juan Hill in the fight for Santiago, Cuba. These troops left Fort Douglas, Utah, on 20 April and returned to Fort Douglas on 2 September 1898. They were noted for their heroic attack up San Juan Hill and for their humane nursing of yellow fever patients at Siboney Hospital in Cuba. The 24th and 9th regiments returned to Fort Douglas after the Cuban campaign; however, in 1899 members of these units were reassigned to other posts in the United States. The leadership of their commander, General J. Ford Kent, was highly praised during the war.

The other units from Utah did not get opportunity to prove their gallantry in war. Troop I of Torrey’s Roughriders, led by Utah Adjutant General John Q. Cannon, spent the period from 11 May to 24 October 1898 in federal service, most of the time in camp at Panama Park, Jacksonville, Florida. They suffered from the heat and many became sick with malaria and dysentery; some from the regiment died. The First Troop of Utah Cavalry, under the command of Captain Joseph E. Caine, did guard duty in Yosemite, Sequoia, and General Grant parks in California. Their duty was to patrol the parks to ensure that these areas were protected from any threats from herdsmen of Spanish descent who tended sheep and cattle there. Artillery Battery C assumed post duties on Angel Island in San Francisco Bay; and Company K of Engineers spent the war near Diamond Head Mountain on Oahu, Hawaii, constructing permanent military barracks.

As units of the Utah Volunteers began to arrive home, Governor Heber Wells proclaimed the arrival day of Batteries A and B—19 August 1898—a holiday. A special “arch of triumph” was placed at 200 South and Main streets in Salt Lake City; a parade, with almost all of the volunteers represented, marched through Salt Lake City; and festivities and speeches at Liberty Park honored the soldiers.