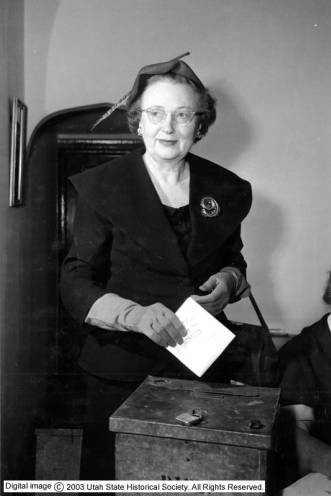 Reva Beck Bosone was born on 2 April 1895 to Christian Mateus Beck and Zilpha Chipman Beck, who managed the Grant Hotel and the Pioneer Opera House in American Fork, Utah. The tall redhead early manifested oratorical abilities and considered a career in the theater but instead turned to teaching. After receiving her education at Westminister College and University of California at Berkeley, Reva married Harold G. Cutler in 1920. The marriage lasted only one year. She continued to teach high school in Delta and then Ogden until 1927 when she entered the University of Utah law school. She married classmate Joseph P. Bosone in 1929. The couple had a daughter in 1930 and opened their law offices the next year in Helper, Utah. They were divorced in 1939.

Bosone lost her first case defending, but she gained recognition when she successfully defended two young men in a well-publicized case of attempted rape. The resulting notoriety helped her secure a seat in the Utah House of Representatives in the Democratic sweep of 1932. The Bosones moved their law firm to Salt Lake City and Reva became a member of the “progressive bloc” of state legislators who sponsored New Deal reform legislation including a minimum wage and hour law for women and children.

Bosone lost a bid for a seat on the Salt Lake City Commission but was re-elected in 1934 to the state house. She co-sponsored in Utah the Child Labor Amendment to the U.S. Constitution, which failed ratification. In 1936 she ran for a city judgeship and became the first woman to be elected a judge in Utah. She served three terms and supported efforts to establish adult alcoholism and rehabilitation programs.

During World War II Bosone served on the Salt Lake County Welfare Commission and was chair of the Civilian Advisory Committee of the 9th Service Command of the Women’s Army Corps, which covered women in eleven western states. She was appointed an official observer at the 1945 organizing conference of the United Nations.

In 1948 Judge Bosone was elected to the U.S. Congress. She served two terms, running in 1950 against Ivy Baker Priest, who later became the U.S. Treasurer. While in Congress, Bosone became the first woman to serve on the Interior Committee. Continuing to be outspoken and energetic, she became involved in two major issues – reclamation projects and American Indian policy.

Bosone worked behind the scenes for the Weber Basin Project and more covertly for the Small Water Projects program that included securing the terminal reservoir on Deer Creek. She sponsored a bill which called for an investigation of the possibilities of Indians managing their own affairs “without supervision and control by the Federal Government.” The bill did not pass but the momentum for “termination” continued through the 1950s, resulting in a policy which eventually proved disastrous to those Indian tribes, such as the Southern Paiutes, who were involved.

Reva Bosone considered running for the Senate in 1952 against Arthur Watkins, but decided to try again for the House. The campaign was as intense and bitter as many across the country in these years of Republican resurgence and Cold War paranoia. Bosone was smeared with false charges of receiving kickbacks and being a communist sympathizer. The latter was related to her courageous vote against funding for the CIA. One of only four in the House to do so, Bosone explained that she was not willing to fund an agency which refused to provide information about its use of the funds.

Her loss to William Dawson in the 1952 campaign left Bosone emotionally and financially drained. She went on to pursue her law practice and worked as an office assistant. With the return of a Democrat to the presidency in 1960 she became judicial officer of the Post Office, the highest ranking woman in that department.

Bosone retired in 1968 and spent the years until her death in 1983 enjoying her family, maintaining a far flung correspondence, being a willing speaker at political and community events, and encouraging women to “raise more hell.”